What Should I do with My 401k Right Now?

Some links within this article are from our sponsors. We provide reliable, and accurate information. Read our Advertising Disclosure.

Investors Most Common Question: How Should I Invest My 401k Now?

Are you unsure of what to do with your 401(k), or if even you should be thinking about doing something with it, to begin with? Don’t fret; there are millions and millions of people out there in the same conundrum as you.

With the economy right now being more unpredictable than it has ever been, there’s nobody in their right senses that would want to take such a leap of faith and risk their financial future.

The direction in which the economy flows is not in your power. However, you have control over your money and what you wish to do with it, particularly when it’s about your retirement.

Even with things steadily returning to normal, more or less, you shouldn’t be complacent when it comes to matters concerning your 401(k).

Although we may not have a clear-cut answer for you, we have a very relevant story that depicts how poor planning and irrational thinking can be detrimental to your 401(k) and overall financial stability.

A Cautionary Tale: The Dangers of Fear Based Decisions

Look at this story for example.

This sent Tom into a frenzy, and instead of giving the market time to recover, Tom cashed in his IRA and moved his 401(k) to a mutual fund thinking it would perform better there.

As the market continued plummeting, Tom relaxed thinking he had done enough to safeguard himself. He essentially acted as if his 401(k) wasn't there.

However, he was about to miss out on a strong market turnaround.

Even though 2007 to early 2009 were difficult, the Dow Jones saw an outstanding surge.

Sadly, the bond investments Tom had made meant that the market resurgence didn't benefit him. As the market continued improving, he was left regretting the rash decision he had made. There’s nothing he could do to alter the past, but he was left obsessing over how things could have been different.

Tom is not one person, but rather a lot of people and you can be him if you become reckless in your decision-making. As of yet, nobody really knows the true extent of the pandemic, and anybody saying they do is a liar.

Nevertheless, it’s a fact that making a decision based on panic never ends well. It’s natural to feel somewhat skittish about some things right now, but you should take a step back and think it over before you decide to commit.

There are various options available for you and your 401(k). We are going to review them, detailing the advantages and disadvantages of each.

If you are depositing cash in your 401(k) account every week, continue keeping at it and you will soon see it grow.

You might be worried about another economic crisis, but in actual sense, the value of your money will only be reclining theoretically. Until a sale made, you won't be incurring any actual losses.

The more contributions you make, the more likely you’ll see the results from your investment. You don’t necessarily need to know about the intricacies of what’s happening in the market in order to make a decision. Regardless of what the economy may be undergoing, you can rest easy knowing you are safe.

He continues to say that no matter how things go, the market always bounces back. So any fluctuations experienced should be considered as temporary, even if current circumstances suggest otherwise.

He says you should look at it like the weather. When you are facing a hurricane or storm, chances are that sunshine is the last thing you’ll be thinking about. However, with time, the clouds will part, the winds will calm, and you’ll finally get to bask in the sun.

Do Not Defer Contributions

If your partner is unemployed or your budget is limited, don’t stop making deposits to your 401(k).

It’s normal to scale back a bit on your contributions. However, that doesn’t imply the progress you've made thus far needs to come to a standstill.

If you were putting in 20% of your paycheck every week, you can revise this by contributing 10 or 15% of what you’re getting now until things plateau.

Also, you should be very cautious when it comes to what you decide to do with the cash you put in your 401(k). If you haven’t come up with an airtight plan for it, then it’s most probably going to waste.

The extra cash you’re not putting in your 401(k) should be recourse to another meaningful project. This money shouldn’t give you the license to spend haphazardly with no second thought. Although we have no say as to how you choose to spend your hard-earned money, we hope we can play a positive influence when it comes to how you manage it.

Increase Your Contributions to Your 401(k) if You Can

Have you recently gotten a pay rise or have experienced some serious windfall through the stock market? You can seize this opportunity by investing it into your 401(k).

Spending habits have significantly altered because of the pandemic, and chances are that you have saved a good chunk of money than you think.

If you can manage to increase your 401(k) deposits by a single figure percentage, you will have taken one big step to financial freedom. In another world, this is money you would have frivolously used on things you didn't even need.

After all, there's a place and time for everything. And at times, it's much better to receive the reward in future.

Putting your money into precious metals such as gold is an excellent strategy for proper retirement planning. This is particularly crucial now, given how gold is highly valued by many people than the dollar when it comes to its stability.

Around 75% of all printed money in America was actually printed last year. This is just extremely worrying and amazing at the same time, given how inflation (even in the case of hyperinflation like in Zimbabwe and Venezuela) could occur at a staggering rate. At the end of the day, those dollars could amount to nothing.

Fortunately, you don’t need to be stressed about it because you have options. Gold has proven to withstand the test of time in terms of its value, and the best part is that you can set up a gold IRA from your 401(k) if you roll it over. There are various benefits to doing this.

Firstly, gold is not linked to stocks and typically surges when the dollar and other assets and in a recession. When the economy is experiencing inflation, gold will be your most valuable asset.

Gold has been used as money for at least 5,000 years, way before the United States was formed. With this asset, you get to see and appreciate the benefits as retirement looms. There’s nothing like retiring, only to come back again because your dollars are not worth anything.

Every situation is unique and you should base your decision on your risk tolerance, work timeline, and current economic and political climate. If you need assistance, talk to your financial planner.

If you’re planning on retiring happy, you should roll over your 401(k) and set up a gold IRA.

Here are the 3 top companies that can help you to learn more about this. Best of luck!

Welcome! In these perilous times of government overreach, reckless fiscal and monetary policies, shutting down small and medium sized businesses and paying people not to work, it has become my mission to protect my assets, my family's assets, and educate as many folks as possible on ways to protect their savings, retirements, and purchasing power, from rapidly devaluating fiat currency.

How a Gold IRA Could Recession-Proof Your Retirement & Unlock Massive Profit Opportunities! 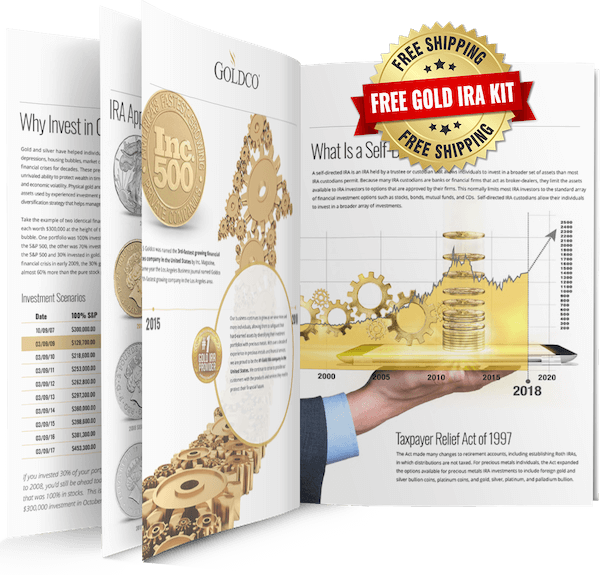